5 Reasons Why Sleeping in Separate Beds is Better for Couples 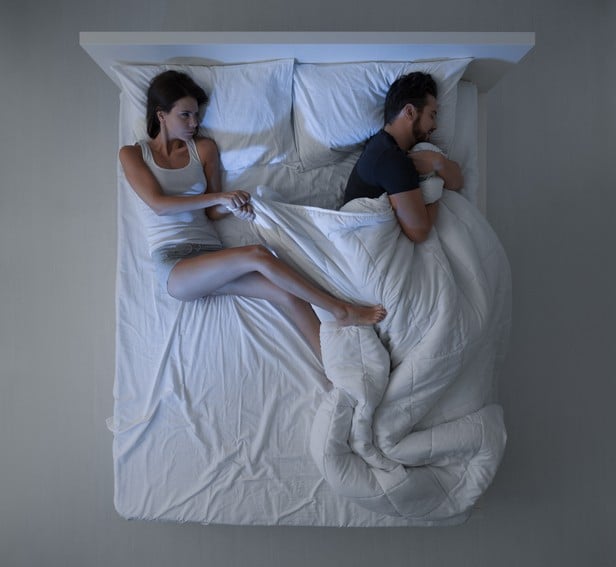 Do you ever wake up at night next to your partner and wish for a good night’s sleep? Maybe one of you is a snorer or blanket hogger? Have you thought about what it’d be like if you slept alone again?

Being in a relationship doesn’t mean you’re not entitled to any personal space! Maybe the bed is the one thing you can keep to yourself. In fact, a significant number of couples sleep apart due to various reasons without it affecting their relationship at all.

If you find yourself in any of these five scenarios, it might be time to consider sleeping in separate beds.

You can’t take the snoring.

This is usually the top reason why people prefer to sleep alone. Imagine being so exhausted and still unable to sleep at night because of your snoring bedmate.

That’s the last thing you want.

According to the Better Health Channel, snoring affects around 20% of the population. It can be caused by factors such as sleep deprivation, fatigue, late-night drinking, or alcohol abuse.

In turn, sleeping beside a snorer can contribute to your own sleep deprivation. You might have to come up with ways to just survive the night – move into another room or kick them out of the bed to get some precious snooze.

The more patient among us actually to battle it out in other ways until they can’t take it anymore. (READ: How to Sleep Near a Snorer)

It’s no fun being sound asleep and then suddenly awoken with a kick to the back or some movement in bed. This is a nightmare for light sleepers who have partners that are heavy sleepers (even worse, they keep moving around!).

Couples who are working crazy hours or varying night shifts tend to rest better sleeping alone. While cuddling is actually nice and can be good for you, people need to sleep so they can function the following day.

If you don’t want to sleep in separate beds, we’d recommend getting a mattress that has no partner disturbance to avoid being woken up by the smallest of movements.

Your partner steals the blanket.

Do we spy a blanket thief?

It’s the middle of the night and you’re peacefully sleeping, feeling nice and warm under a blanket… then it’s taken away from you. You’re left almost as cold as ice. No doubt – your partner is a blanket thief (or are you the blanket thief?).

This is obviously not a good feeling. So, if sleeping in separate beds isn’t an option, you might want to consider sleeping with separate blankets.

One of you sleeps hot.

Feeling warm in bed is great… until it gets too warm.

Isn’t it nice when you’re cold in winter and you can snuggle with your partner to warm up since they’re almost like your personal heater? But then in summer do you want to push them away because it’s way too hot for physical contact?

Some experts say that setting of about 18 degrees Celsius or 16 degrees Celsius (with piles of blankets on) is best for sleep. However, this doesn’t consider that everyone has a different body temperature while sleeping. Sometimes our partners end up sweating a river in bed that they wake up feeling drenched. During the night you then might feel their heat radiation, making it way too warm for you to get a proper night’s sleep.

Again, if sleeping separately still isn’t an option, you might want to invest in a breathable mattress with cooling mechanisms to ensure neither of you is sleeping hot.

Sometimes couples are forced to sleep apart due to their baby’s erratic sleeping schedule. This is because mothers need to nurse their babies 8-12 times in a 24-hour period!

In cases like this, it might be best to let your partner sleep in a different room during the first few months of breastfeeding.

At the end of the day, sleeping separately must be a mutual agreement between any couple. It should keep your relationship happy - not complicate it. It’s safe to say sleeping separately is not for the faint of heart - it’s often for genuinely happy couples who really could use some sleep.